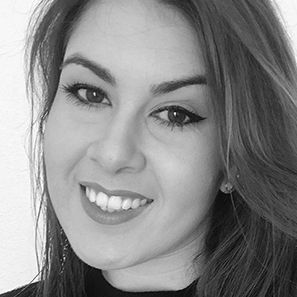 Anna Coutinho is a communication designer and has obtained her degree from the Escola Superior Artística do Porto in Portugal. In 2015, Anna completed her Master’s degree in Graphic Design and Editorial Projects at the Faculty of Fine-Arts at the University of Porto. During her master’s, her studies focused on post-revolutionary propaganda posters in Portugal.

From 2010 to 2017, Anna has worked as a communication designer and social media manager for companies and museums and was also responsible for organizing congresses, events and campaigns.

Since 2016, she is a PhD student at the Lusófona University and her research aims at articulating political communication, mass media agenda and ethnographic analysis. In 2018, Anna began working as an Integrated Researcher at CICANT (Centre for Research in Applied Communication, Culture, and New Technologies) and she has also been granted a Science and Technology scholarship at COMEGI (Center for Research in Organizations, Markets and Industrial Management) at the Lusíada University in Lisboa.

In 2019, she acted as a member of the research project European Elections Monitoring Center promoted by the University of Rome Tre, funded by the European Parliament (Events Category COMM/SUB/2018/E id. n. 0147.). Anna has assumed the position of pedagogical coordinator, cooperation projects and social media manager at the Film and Media Arts Department at Lusófona University. Anna is also the editorial manager of the International Journal of Film and Media Arts and the International Journal on Stereo & Immersive Media.

As part of her commitment to transforming the world into a more inclusive place, Anna contributes to a north-American NGO Empowerment Through Integration’s projects as ETI’s Communication & Social Media Consultant.